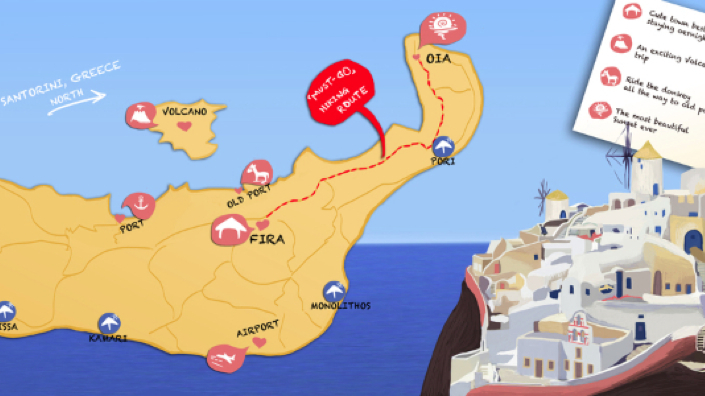 Santorini: one of the most beautiful islands in the world, one of the most romantic sunsets, some of the most photogenic villages, many black pebble beaches and sooo many questions.. Lets get started trying to answer them and make your holiday planning easier.

Santorini is a small greek island in the southern Aegean Sea. It is one of the 33 inhabited islands that form the archipelago of Cyclades. Actually, Santorini is the southern most island of the Cycladic island group and is located 127.7 nautical miles far away from Pireaus.

Well, it may get quite confusing, looking up the word Santorini very often you come across the name Thera ot Thira as well, but is there a difference?

Santorini or Thira is a group of five volcanic islands. The biggest island of the five is called Santorini or Thera, let’s say that Thera is an older name and the official one till today.

The second island which is inhabited as well is called Thirassia while the name of the 3 smaller islands are Aspronissi (the white island), Nea Kameni (or the volcano :)) and Palaia Kameni. Now you have a generall icon about the archipelago of Santorini!

3)Such a famous island, how big is it?

4)How do I get to Santorini?

From May till October many charter airlines fly directly to Santorini airport from various European cities.

Santorini airport (JTR) is situated on the east coast of the island. Very close to the famous summer resort area of Kamari, next to Monolithos area. The airport is about 10 minutes by car from Fira, the capital of the island, and approximately 30 minutes from Oia, the northern most village of the island. From the airport there are public buses to Fira, where you can change to buses for other towns. Taxis are also usually waiting at the airport, but competition for them can be keen. Many hotels provide shuttle services to and from the airport as well so check it out. In Santorini Airport there are car rental companies currently operating including world wide famous companies.

Are you an island hopper? Are you planning to visit any other islands? During the summer season the Santorini is connected with many surrounding islands.( Ios, Naxos, Paros, Crete, Mykonos, Tinos, Syros Rhodes, Anafi, Chalki, Diafani, Folegrandos, Karpathos, Kos, Kasos, Katapola, Kea, Kimolos, Koufonissi, Kythnos, Lavrio, Milos, Serifos, Sifnos, Sikinos, Thirassia are some of them)