What color do you think when you speak of Santorini?!

When I asked my Instagram friends what colour they think when they speak of Santorini I received just one answer: BLUE and that was not out of the clear blue sky, or was it?! 😄 The prevailing colour on Santorini is definitely blue. So is today! Let’s beat the “blue Monday” blues by diving in the intriguing history of our cherished color!

It was back in 2005 when Cliff Arnall (according to Wikipedia) launched the concept of “Blue Monday” . The psychologist was commissioned by the British tour operator Sky Travel to form an equation and determine the gloomiest day of the year. The goal of the t.o was to amplify their publicity campaign on that specific day and boost their holidays products as the gloomier people are, the more likely to book a holiday in the sunshine! Smart, isn’t it?!

The factors taken under consideration to create the complex formula were the weather and financial conditions, the past time since Christmas, the time to the next holiday, the failure of New Years resolutions etc. Back in 2005 all the above mentioned used to be quite serious problems and for sure they would make us feel “blue”, down, depressed. Since then things have changed. Thanks to 2020, scientists and academics who mocked the “ Blue Monday” concept as pseudoscience and nonsensical, were proved right..and today all the “problems” that were considering big in 2005 are not valued as that serious anymore.

Despite the fact that blue has been associated with emotions of sadness and depression it still wins the polls as the most favourite colour! Throughout the centuries its connotations have remarkably changed various times.

For the ancient Egyptians blue was a sacred color. Egyptian blue was made out of ground limestone mixed with sand and a copper -containing mineral (azurite or malachite). Archaeologists have brought to light an impressive number of blue painted scarab beetles in the pyramids in Egypt. The scarabs were offered as an amulet that would accompany the Pharaohs and keep the, company as a symbol of rebirth and regeneration.

In the magnificent wall paintings of our Akrotiri blue is rarely used. In the few occasion ps where we see blue it has a very symbolic and powerfull connotation: sacredness and holiness, (see Blue monkeys wall painting). Have you ever see the famous “Boxing boys” wall painting? What colour are their heads?

During the antiquity blue pigment was made out of lapis lazuli, the semi precious stone that used to be as precious as gold. This probably explains the reason why suddenly blue disappears from the art! The hue is totally absent from the language too, it is never mentioned. That made the scientists believe that ancient people were colour blinded! For Homer even the sea wasn’t blue, it had a “wine- red dark” colour 🙄

Generally, blue was scorned as ugly and barbaric due to the blue – eyed Celts who dyed their bodies blue for battle. So, it was unworthy of use. Byzantines ignored blue too. The triumph of blue happens when on the 13th century Virgin Mary wears a cobalt blue garment as she rises to the heavens in the abbey of Saint Dennis in France. It was just then when blue got codified as the colour of innocence, trustworthiness and was seen as a positive light. This same blue gained new favor as a royal color and then navy blue was adopted by militaries and police to convey a similar essence of trust and authority. In about 400 years, blue came to be associated with the Virgin Mary, royalty, honesty and morality.

As for me blue is one of my favourite colours! It doesn’t make me feel blue, on the contrary , my eternal beloved piece of art is blue! Can you guess what am I talking about?

“Oh God, how much of blue colour do you spend in your disguise from us” wrote the Nobel prize winning poet Odysseus Elytis inspired by the Cycladic landscape.

We are the artists of our lives and we should never give the paintbrush to anyone else! What is your favourite colour and what about blue? Which hues do you use to paint your life? 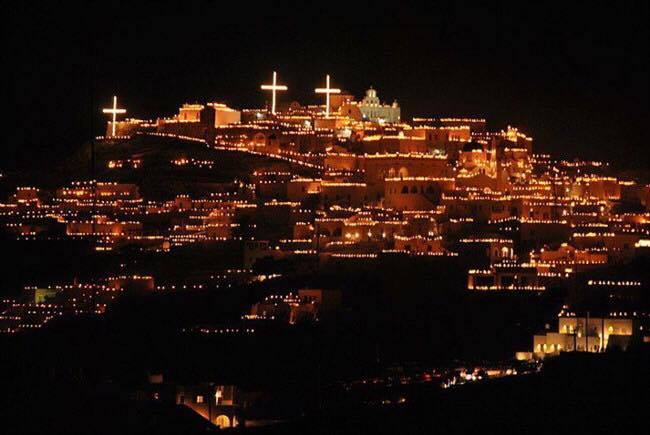 One of the greatest celebrations of Christianity is Easter. If Christmas is a commercial celebration, Easter is the most sacred observance in the Greek Orthodox faith and is the most important holy celebration in Greece, even more important than Christmas. END_OF_DOCUMENT_TOKEN_TO_BE_REPLACED