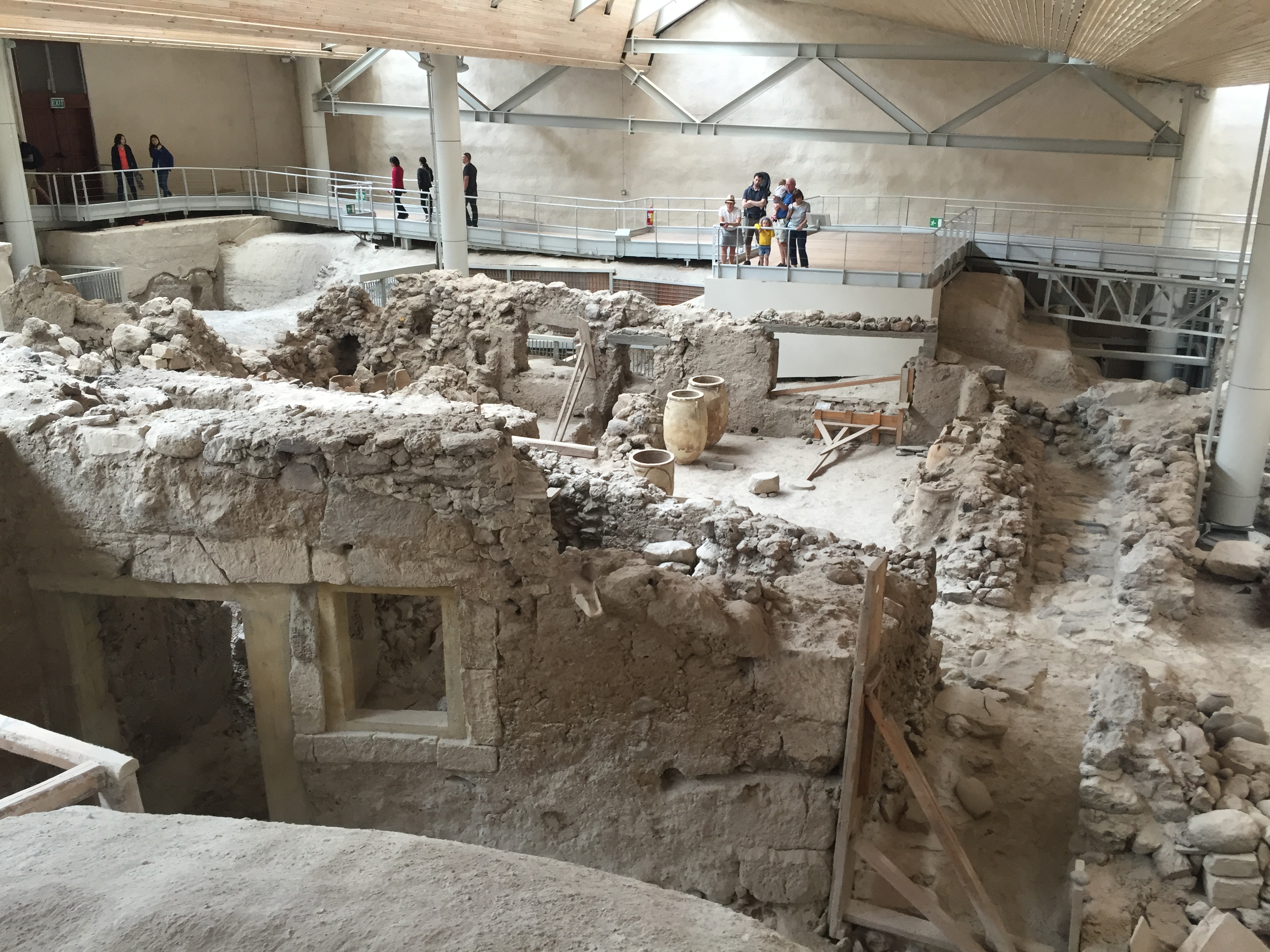 The first time that the name Atlantis was mentioned was around  360 b.C by Plato, the famous Athenian philosopher. Plato speaks about a very advanced ancient civilization that was destroyed in a cataclysmic way.

How is the Atlantis related to Santorini?

A spring day of 1967 Spyros Marinatos brings to light  a very important archaeological site. And christens it Akrotiri after the nearby medieval village, as the real- original name of the ancient city still remains unknown to us. Due to the similar way both of the cities were destroyed names it as well the “greek Pompeii”. Akrotiri was a city that was destroyed by a tremendous volcanic eruption 3.600 years before today, therefore around 1650 b.C, while Pompeii was destroyed in 79 a.D and there is another spectacular difference between Pompeii and Akrotiri and that has to do with the population, the inhabitants of the prehistoric city. Did they get trapped and die in their city during the volcanic eruption like in Pompeii? There are no human remains, no bodies, not even the bones of a single domesticated animal. This along with other clues tells archaeologists that the people of Akrotiri had a warning that the eruption was coming and as wealthy seafarers they probably had the means to flee taking all their treasures with them. No traces were found and what happened to them still remains a mystery!

At the southern part of Santorini, 12 km away from the busy capital Fira is situated the breathtaking archaeological site of Akrotiri. A brand new, bio-climatic shelter welcomes the visitors and covers all the excavated so far extension of the settlement the as the fragile ruins of the city need to be covered up and get protected and makes the tour in the archaeological site a really pleasant and unique experience:  no sunlight, no big lines under the summer heat. Walkways take you around the edge of the city and there is a pathway that leads down to the main square of the passing through some of the multi stories houses.

What you should expect to see? A unique prehistoric city, a civilization that cannot be easily compared to any other civilizations. By the prehistoric port the largest so far found  buildings of the excavation will impress you. Three storey buildings made exclusively by an expensive material called “Xeste”. As you move around the city you admire the private houses where the islanders were spending their lives 3.600 before today! Architectural elements, pottery, art crafts, wall paintings, there is a toilet as well and many plaster casts of the furniture people were using a long time ago.  The main road and the perfect plumbing network will definitely strike your attention. Do not forget to take a look at the archaeologists working on the spot as the excavation is still in progress.

In the museum of Prehistoric Thira at Fira you have the chance to see some of the original wall paintings, pottery, plaster casts etc. If you want to combine a visit both to Akrotiri and at the museum at Fira go for the combined ticket of 14 euros.

Best time of the day to visit: usually the site gets crowded in the morning hours while most of the time it is much more quiet and pleasant in the afternoon hours ( after 15:00)

Photos are allowed. There is a vending machine for you to buy some water or a soda

Either you are a history lover or not this is a must see when visiting Santorini! Who wants to miss the chance to walk in the city that was destroyed 3.600 years before today by one of the biggest natural disasters ever and experience how people we living on the round island during the late bronze age.

After having given tours to many groups and individuals there is no way that you do not get impressed and astonished by this unique civilization. The duration of the tour is approximately one hour and a half, it   is very informative and no boring at all since the tour is enhanced with visual material and according to a big part of our guests the tour in Akrotiri is a life changing experience! Enjoy a unique and unforgettable journey to Late Bronze age in one of the most interactive archaeological sites worldwide!